For the first time in eight years, the leaders of the Soviet Union and the United States hold a summit conference. Meeting in Geneva, President Ronald Reagan and Soviet leader Mikhail Gorbachev produced no earth-shattering agreements. However, the meeting boded well for the future, as the two men engaged in long, personal talks and seemed to develop a sincere and close relationship. The meeting came as somewhat of a surprise to some in the United States, considering Reagan’s often incendiary rhetoric concerning communism and the Soviet Union, but it was in keeping with the president’s often stated desire to bring the nuclear arms race under control. For Gorbachev, the meeting was another clear signal of his desire to obtain better relations with the United States so that he could better pursue his domestic reforms.Little of substance was accomplished. Six agreements were reached, ranging from cultural and scientific exchanges to environmental issues. Both Reagan and Gorbachev, however, expressed satisfaction with the summit, which ended on November 21. The next summit was held in October 1986 in Reykjavik. Continue reading via this link.

Personal Postscript — At the time of the 1985 summit conference, I was serving as an LDO lieutenant in the JAG Corps on the USS Kitty Hawk (CV-63), a U.S. Navy aircraft carrier that was cruising in the Indian Ocean. Now in 2021, I have been retired from the Navy since 1994, and the following biography of the best president in my lifetime waits for me on my Kindle. Perhaps it’s time for me to read it. 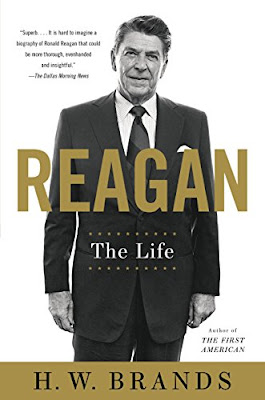