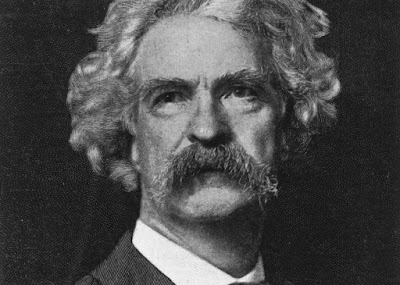 The author of Tom Sawyer is avuncular, unthreatening, genial—cuddly almost. The Mark Twain that comes later has sharper edges, and may not be cuddly at all. What does it mean to embrace the tame Twain—the author of unthreatening books for children, beloved stories, and clever aphorisms—but to largely ignore the author of the hard-hitting essays and searing commentaries who grew increasingly disillusioned with the behavior of his countrymen and his fellow human beings generally? It’s fine to enjoy Tom Sawyer. But freezing Twain as the author of Tom Sawyer denies all he learned about himself and his country by the time he wrote Huckleberry Finn; and doing so deprives us of a Twain we desperately need to recover today.

Recently I have been reading and posting about the 1950s. Two books that I read in that decade were Mark Twain’s Tom Sawyer and Huckleberry Finn.

Well, being avuncular though not cuddly but with plenty of sharp edges myself, I’ve now lived slightly longer than Twain. His life began under a different name in Florida, Missouri, and my life began under a different name a few miles from Harper’s Pond. And I’m still trying to make sense of it all. Blogging about the past seems to help with that effort.