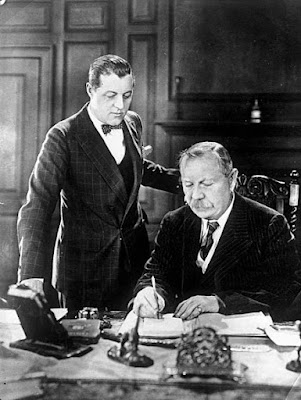 Adrian has been depicted as a racing car driver, big-game hunter, explorer, and writer. Biographer Andrew Lycett calls him a "spendthrift playboy" who (with his brother Denis) "used the Conan Doyle estate as a milch-cow".

Adrian Conan Doyle produced additional Sherlock Holmes stories, some with the assistance of John Dickson Carr. The basis of his production was to complete those tales referenced in his father's stories, which his father had never written. (Carr had published an "authorized" biography of Sir Arthur in 1949.) These additional Sherlock Holmes tales were written in 1952 and 1953, and a hardcover collection of the stories was published as The Exploits of Sherlock Holmes in 1954. They have been reissued subsequently, while other authors have also written Sherlock Holmes stories based on the same references within the original tales.

Continue reading via this Wikipedia link.